Trade concerns are increasingly discussed within the UNFCCC where for instance, Article 3.5 of the UNFCCC states that climate change measures should not pose a restriction on international trade. While the recent Paris Climate Conference did not explicitly address trade policy measures, the resulting agreement and Nationally Determined Contributions (NDCs) may have several implications on trade that cannot be overlooked. Similarly, WTO negotiations on climate change revolve around eliminating trade barriers in eco-friendly goods and services.

At this meeting, climate and trade negotiators met in Kampala, Uganda, in an effort to better coordinate their positions in these two fora. The discussions started with each of the country partners presented the main highlights and recommendations from the country update notes (CUNs) on “Analyzing Potential Trade Impacts of the Paris Agreement: Views of National Stakeholders & the Way Forward”.

Many similarities appeared when presenting the different CUNs. EAC stakeholders need to access green technologies as well as climate finance to be able to effectively implement adaptation and mitigation actions, encompassed in the Paris agreement and the Nationally Determined Contributions (NDCs). Their capacities need to be built, and they must access “green” markets to be able to get positive outcomes from the Paris Agreement. LDCs and developing counties should not bear the costs alone of moving from brown to green economies.

Some partners also mentioned that sensitization needs to take place on Paris Agreement and its potential impacts to a wide range of stakeholders. Many of them (i.e. farmers and businesses) need to be involved in the implementation process, including the national policy-making process.

Then, some of the main issues of the issue note developed by CUTS International on “Trade and Climate: Are their Interlinkages Taken into Account in the WTO and UNFCCC Systems?” were presented. While one may consider trade concerns and trade policies to fall within the sole jurisdiction of the WTO, this is not the case.

Trade concerns are increasingly discussed within the UNFCCC where for instance, Article 3.5 of the UNFCCC states that climate change measures should not pose a restriction on international trade. The Paris Agreement on the other hand does not specify any policy or measure regarding trade, rather it compels parties to develop Nationally Determined Contributions (NDCs). The Agreement and NDCs would however have several implications on trade that cannot be overlooked.

Climate issues are addressed to some extent within the WTO framework where such considerations fall under the Committee on Trade and Environment (CTE). Ongoing WTO negotiations on climate change however revolve around eliminating trade barriers in eco-friendly goods and services.

The floor was then opened to forum participants for remarks and comments. Many delegates were of the view that the issues of financing and technology transfer will be critical to ensure an effective implementation of the Paris Agreement and the NDCs.

A WTO delegate shared a challenge regarding private standards that do not fall within the jurisdictions of the WTO, and can however affect negatively trade exports in the region. Another delegate raises the issue of potential trade impacts of the Paris Agreement that should have been analyzed before signing the agreement and submitting their INDCs.

A clarification was made concerning the Agreement on Environmental Goods, which is a plurilateral agreement of which the EAC countries are not part of. It is hence impossible for them to influence the process, and it will not be beneficial for them to join the negotiations for now.

Trade can possibly be emphasized in climate negotiations, when discussing climate justice and loss & damage for instance. The next joint negotiators’ forum will take place around August/September 2017, on the sidelines of the 2nd Regional Annual Meeting of the PACT EAC2 project. 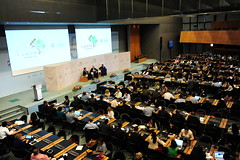 Trade and Climate: Are their Interlinkages Taken into Account in the WTO and UNFCCC Systems?