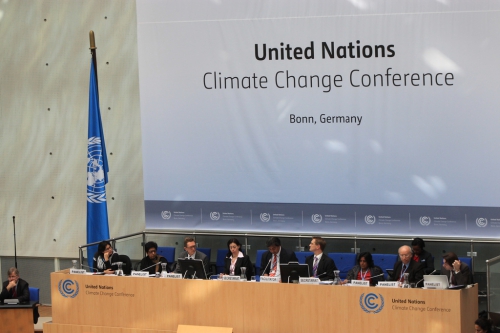 Africa and its communities, its lands and its markets have been one of the main victims of climate change for years. Even if it is commonly agreed that African countries have contributed much less to climate change, it is now time for all take responsibilities and jointly take coherent and equitable decisions to protect our environment for future generations. The 21st Conference of Parties (COP 21) of the United Nations Framework Convention on Climate Change (UNFCCC) represents a critical moment to ensure sustainable development and livelihoods, especially for the poorest communities. In this view, the African voice must be heard and taken into account appropriately into the final decision.

Taking into account interlinkages between climate change and agriculture: a path towards a sufficient Paris agreement for Africa

The economic and social development of African countries is closely linked to agriculture. Agriculture and land-use are of critical importance to ensure economic growth and food security of the continent. The challenge that appears here is that agricultural activities and productivity are nearly fully-dependent on climate. Countries from all over the continent have been the victims of climate change impacts (floods, droughts, etc.), often influencing negatively both their trade and food security. It has been recognized by the fifth assessment report of the Intergovernmental Panel on Climate Change (IPCC) which states that rising temperature in many areas in Africa have ramifications for agriculture and farmer livelihoods.

African Group of Negotiators (AGN) to the COP21 is fully aware of these interlinkages, and the risks that these may cause. They have expressed on many occasions different ways for the UNFCCC parties to take into account the impacts of climate on agriculture, as well as to emphasize the criticality of agriculture to African economies. Both of these considerations should hence be reflected in the agreement itself, or as proposed by Mr George Wamukoya, a member of the AGN: “the Intended Nationally Determined Contributions (INDCs) should serve as the platform through which Africa position itself in advancing agriculture and therefore making a statement to the world that agriculture should be included in the 2015 agreement”.

Africa has been the scene of tremendous advancements in terms of capacity-building, knowledge development, and increased partnerships between scientists, policy-makers and lawyers related to climate change negotiations. A lot of preparatory meetings have been taking place for some years now to prepare the future climate agreement/framework that will replace the Kyoto Protocol. These meetings were an opportunity for African climate negotiators and wider stakeholders to get together and design coherent proposals and positions.

A few days before the start of the COP21, these efforts resulted in a common statement issued by African leaders and United Nations experts (African Union Commission and United Nations Economic Commission for Africa). The common African statement affirms that: “Africa needs to have a comprehensive agreement focusing on the issues of mitigation, adaptation, financing and technology transfer”. It also calls for: “A fair, equitable and legally binding agreement” in Paris. African countries wants the UNFCCC parties to adopt an inclusive approach, while designing a framework that follows the differentiation principle, or the so-called “Common But Differentiated Responsibilities” principle. However, the African Group is not supporting the proposals to include INDCs as an obligation for parties under the new agreement.

Negotiating with one voice: Africa’s best (and only) viable option to make its voice heard in Paris

These common proposals will need to be strongly defended by all African negotiators, as some major developed and developing countries (such as the USA) are advocating for a non-legally binding agreement. The only viable option for the continent to make their voice heard in the negotiating process is entering the room in Paris as a bloc.

As African countries play an increasing role on the global economic and political scene, they are more and more conscious players of the rules of the negotiations’ game. As demonstrated, it has been with no doubt the case within the UNFCCC negotiating process. That is why Africa is the only continent that has decided to go to Paris to negotiate with one and only voice. Its political leaders have realized that having an African Common Position can boost the continent participation in the overall negotiation process, and hence increase the strength of their proposals.

It is critical that African countries keep that solidarity going throughout the overall process in Paris to avoid an agreement that will not be beneficial for the continent’s economic, social and environmental development. Mr Mithika Mwenda, Secretary General of the Pan-African Climate Justice Alliance (PACJA) urged African countries to remain united during COP21, as well as to avoid centric position, as it was the case previously.